Edmonton Oilers @ Phoenix Coyotes: In Where We Try to Spoil Your Season

Share All sharing options for: Edmonton Oilers @ Phoenix Coyotes: In Where We Try to Spoil Your Season 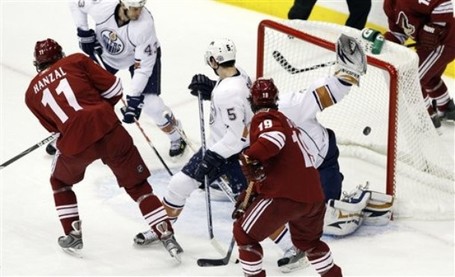 Martin Hanzal puts the game winner past Roloson. It's about friggin time we beat these guys. YOU'RE WELCOME ST. LOUIS AND NASHVILLE!

Better late than never for a postgame. The Coyotes took the Oilers out to the woodshed for two periods last night. They made the game interesting by letting them back into the game for about 10 minutes, but were able to clamp back down and seal up the game. To the breakdown!

Matthew Lombardi would open the fun for the Coyotes early in the game when he took a rebound off of Bryz and went coast to coast for a sweet goal right over the shoulder of Dwayne Roloson. It's been a while since i've seen something like that from the Coyotes. The rest of the first period went scoreless, but the Coyotes dominated the play for pretty much the entire period. I'm used to looking up and asking if the other team in on the power play when in fact it's even strength. I am not used to saying the same for our guys. There were long stretches of sustained pressure. Even if they weren't converting chances, it was certainly nice to see that we could determine how the game was going to be played for a while.

Coyote dominance continues. They picked up where they left off which again I haven't seen in a while. They have a habit of becoming a different team after intermissions for better or for worse but they kept up what they had done in the first period in the second. They got for pressure on Roloson and were an absolute pain in the checking department. Daniel Winnik was slamming guys left and right as well as Nigel Dawes. Ken Klee got his first goal of the season a little bit past the halfway mark of the period. The puck was bouncing all over after a rebound went to the side. The Edmonton defense collapsed to the the end boards and left Klee and the point wide open and he let it rip from just inside the circles. Later in the period Martin Hanzal got one in off what was a play created almost entirely by Shane Doan. He was massive on the puck control all night, weaving in and out of defenders. He took it in deep to the side of the net and got it to Prucha who fed Hanzal right in front to a pretty open net on the far side.

In the third the Oilers apperently remembered that they were fighting for their playoff lives. They got a lot of help with bounces going their way, but also the Coyotes not going for the kill. Ales Kotalik got the Oilers on the board when he let one go from the point and deflected off a Coyote player and past Bryzgalov. Less than a minute later Ales Hemsky scored to bring the Oilers within one when he got a bounce off the inside of the post to rattle off and in. So the Coyotes let their guard down just long enough for a good team to get good breaks and it looked like they were letting this one go. But, they clamped back down and kept the Oilers from getting anything else going.  As time was running out, Sam Gagne smacked Daniel Winnik with a high stick with maybe a second left on the clock and the Coyotes had the puck. It was hard to see how bad he got hit, but it was in the face and completely unnecessary. Luckily the rest of the team grabbed him before he got back to Gagne. We may be out of the race, but we don't need any suspensions.

It was a pretty good game out of our guys. The score actually made it seem closer than I think it actually was. The Coyotes dominated the boards and the play even though they were getting out shot. The shot quality for the Oilers was not very good though as we limited the chances and Bryz was on fire once again. THat's all i've got for now. See you on Saturday for the Sharks game.

By the way, we may not have tanked this game, but I have 9 tank clips to play and 9 games to play them in, so you still get a tank clip even though we won. Enjoy!