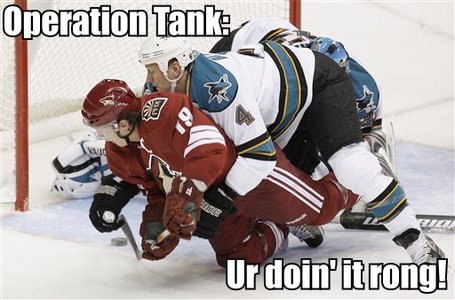 That was an excelent finish to a pretty lively game at Jobing.com arena. We took a little deviation from our tank plan, but that's okay. We always show up to play the tough teams. Even if we don't show up for the whole thing necessarily. The Coyotes owned he first period though. At :19 seconds into it Kyle Turris came flying through the zone to wrist in a rebound off of a Shane Doan shot. It was a wicked goal and one that Turris really needed. He wasn't done yet though, later in the first he rang one off the crossbar but the team regrouped and he shot it again from the side and it trickled it past Nabokov and two other sharks. The goal was initially credited to Jovanovski since he was camped in front, but it never went off of him. To close out the period Dmitri Kalinin clanged a shapper off the post and bounced it around and in for his first goal as a Coyote. The Sharks just looked stunned and we looked like the team that was playoff bound before the All-Star Break.

Brian Boucher came in in relief of Nabby to start the Second. This was apperently the fight period as scraps were breaking out all over. Brian McGratton and Jody Shelly dropped the gloves in a heavyweight match. McG was recalled from San Antonio earlier in the day after completing the NHL substance Abuse Program. He looked great out there. He was in control of the fight and landed some bombs on SHelly. He added a little flair after the fight waiving Shelly off that reminded the fans of Danny Carcillo. Staubitz and Prust also had a go. It was mostly a hug fight, but Prust got a few good ones in late. Beyond that there was a bunch of pushing and shoving as SJ was ticked to be behind to the lowly Coyotes and the Coyotes were annoyed by being pushed. Even guys like Turris and Zbynek Michalek were chirping at the Sharks. Joe Thornton got a goal on the Power Play after a terrible penalty call and non call got them there. It was a pretty goal but the crowd was irate. Scottie Upshall got knocked around a bunch by two Sharks but somehow the penalty got called on Keith Yandle of the Yotes. I can't find a clip of it, but those type of calls are what make me wonder why more objects aren't thrown at refs. I'm not condoning it, just saying...

On to the 3rd. The Coyotes really started looking more like the team that had been losing games in this period. Thornton got his second of the game about 4 minutes in. Good move by him to score it, but it was helped by the entire Coyotes squad moving to the far side of the ice to chase the puck. Then everyone got left scrambling to get back into position to cover. Good on their side bad on ours. Marleau would tie it up at 3s at the 8:20 mark when a thornton shot rebounded straight into the slot for Marleau. The Coyotes woke back up and remembered how to play defense for the remainder of the game. They started checking again and trying to keep control of the puck. It looked like the teams would head into overtime until Jonathan Cheechoo took an interference penalty off of a face off with 33 seconds to go. With the faceoff in the Sharks' end Kyle Turris won the draw and Shane Doan was able to make a nifty move and get it past the outstreched skate of Brian Boucher for the game winner, even with Rob Blake hanging all over him.

We may have deviated from the tank plan, but it sure felt good to rain on the Sharks' parade tonight. Kyle Turris and Doan will have to share Star of the Game. Doan and Turris both ended up with 4 points each, meaning both had something to do with every goal tonight. Turris was 2-2-4 Doan 1-3-4. THat's taking a rookie under your wing for a game Doaner...

We may have won tonight, but it didn't put us any further out of the tank race. We're now in a threeway tie for 3rd  pick with the Coyotes technically being ahead of Colorado and Atlanta because of our amazing inability to score goals over the losing skid.