Predators sink Coyotes 2-0 - Phoenix Moves Up (Down?) In Tank Standings

Share All sharing options for: Predators sink Coyotes 2-0 - Phoenix Moves Up (Down?) In Tank Standings 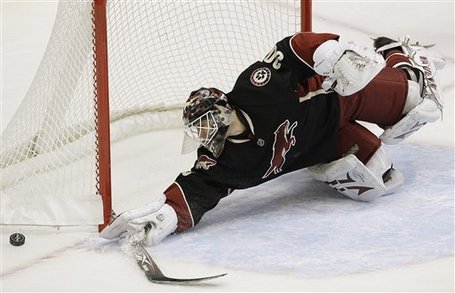 Well another game and another loss. That puts our guys at an astounding 4-16-1 since the all-star break. I don't even have any context to put that in to describe how bad of a record that is... I'm really at a loss. I knew we were doing poorly, but that's just an awful record no if ands or buts about it.

Tonight wasn't too bad of a game. Mostly thanks to Ilya Bryzgalov. He's had an off night here or there during the season, he was on tonight though. He did great, only gaving up one goal on 32 shots. Pekka Rinne did well too getting the shutout, but the Coyotes made it easy on him only taking 18 shots. 10 of them were in the 3rd too. That's just not going to win on any night guys. Once again the team just looked lost out there. Whatever the coaching staff is trying to do, it's not working. It hasn't been for a while now. Puck control is nowhere to be found, the dump and chase isn't working. Even when the guys are able to carry the puck in the zone there's no one there to pass to and it just gets turned over. It's ugly hockey right now and that's why we're just looking forward to the draft at this point.

With the loss, combined with 2 Atlanta wins (way to go!) we're tied in points with the Thrashers for 5th. Both teams have identical records and played an uneven schedule so goal differential was used to break the tie and Phoenix's -44 was worse so we're now in the 4 spot. We just need Colorado and Tampa to pick up some games and we'll continue our Rise (fall?) in the standings.