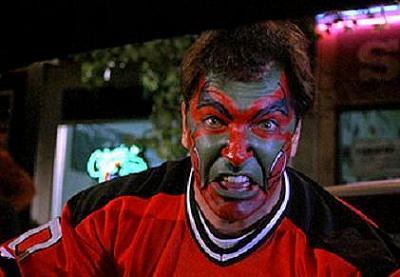 You're dead, Messier! We're gonna get you, Messier!

Welcome back Coyote fans. Tonight your high draft pick seeking Coyotes take on the New Jersey Brodeurs in what could be, well anything depending on what Coyote team shows up. We've played terribly against weak teams and well against strong ones so we'll just have to see what happens. The game is not on local TV, so you'll either have to find a stream online or find a friend with center ice if you don't want to be stuck listening to the game on the radio.

Beat Brodeur: Martin Broder is chasing some history and the team is going to want to win one for him tonight. If he could get a win tonight he'd be only one game behind Patrick Roy for the all-time record for wins by a goaltender. Plenty of people are expecting us to be a doormat and while it would improve our draft position, I still want to win and i'm sure our guys do too.

Stop with the Turnovers!: Outside of special teams our next biggest weakness is turnovers. It seems like any time we're on the verge of getting something going we dump it off to the other team. Or we try and dump and chase and it doesn't work. A little hard to score if you can't keep control of the puck.

No Softies Please: The last few games Bryzgalov has been in he's let in an early goal or two that were not the hardest shots to get too. They were simply soft goals. We won't have to worry about that tonight though as Josh Tordjman will get his second NHL start. That does create a whole different set of issues though as the D will need to stick to their guys so he can get settled in. He wasn't bad in his other stat, but he needs to do better if he thinks he can backup Bryz next year too.

Traffic in the Front: Part of what made us look good the other night and in Boston a few games back was our ability to get guys to the front of the net. they were crashing on shots, creating traffic and being a pain to the other team. That works, so let's keep it up. I don't get why we shy away from that style if it gets us goals and wins, but we do.

Find that something Extra: The playoffs are pretty much out of reach, so you guys have to dig deep and find that something that puts you over the top in games. We tried to come back against the Islanders. We hung in there the whole game with the Wings. We're just missing a little something that gets us past them in games. Again it could be any number of things, just find something to give you some extra umph.