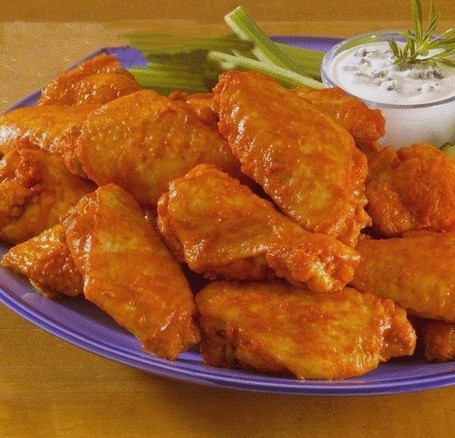 Yeah, they're making me hungry too. I'm gonna dip them in ranch and destroy them like a Coyote destroys a Red Wing :)

Yippee! We're out of the playoff race, but at least we get to try and make the teams we hate look terrible on their way to the playoffs. If we're not going to make it and we're not drafting Tavares, then we may as well play spoiler as much as humanly possible.

Five for Winning Brought to you by Frank's Red Hot. It's not a hot wing without Frank's Red Hot! (Not really a sponsor, but i'm open to it Frank, call me.)

Mild: I'd say take a second and think about what you're doing out on the ice, but that doesn't work because you guys take five and turnover the puck. Instead just don't think at all. You've been playing hockey since you could walk. Just play natural pond hockey. Pass shoot score. Easy right? Yes. Be one with the ice... Ohhhmmm.

Medium: Stop it with the dumping, or at least make sure it's dumped. Dump and Chase can work, but it only works if you dump it in deep enough that the other team doesn't already have it before you can get to the blue line. Barring that give it to someone with the cojones to take it in over the line. Bods, Lombardi, Yandle someone.

Hot: Hot would describe how our new guys have been playing. They apparently know what's up. Keep getting them involved. Upshall has a couple goals so far, Lombardi has one too. Keep it up guys, maybe our young guys can take a tip or two. Or eleven.

Suicide: I've liked the effort that the guys have been puting in even if they haven't always gotten to the puck. They're crashing, diving doing whatever it takes to try and make the play. The results haven't been there everytime, but I like that we're trying.

BBQ?!: BBQ wings are not okay! Only Commies like BBQ. And crazy people. Like Bryz. Ilya will be back in goal tonight, which is good since Tordjman doesn't need to get lit up by the Wings. Hopefully he gets it done.

Lines for tonight taken from a fortune cookie by Wayne: