Share All sharing options for: Special Teams Let the Coyotes Down Again as Blues Win 2-1 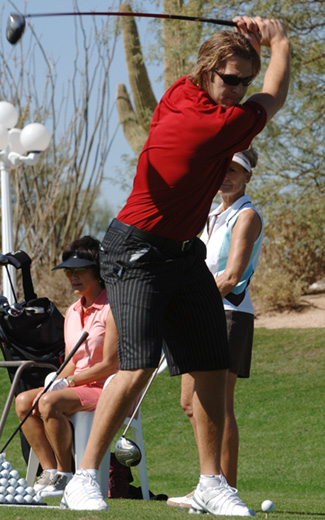 With the loss the Coyotes get one loss closer to golf season. Godawful...
(Coyotes Wing Daniel Winnik in photo)

Holy... I don't even know the words... Bryz lets in a softie and the Power Play forgets that just because you're on the Power Play, it doesn't mean the other team isn't allowed to touch the puck. We commited a grand total of... ZERO penalties the whole game. We had a 4 minute double minor that got a whole lot of nothing. Then we had another 2 minute PP in the last 5 minutes and get nothing going. We try and get the goalie out, but can't control the puck long enough for Bryz to even think about coming out of his net. We had everything going for us tonight with how the other teams were performing around the league. West teams getting beat by East teams, Nashville was losing until they rang up the Hawks in the 3rd, but we HAD to win. Instead we did our usual Late 2nd - 3rd Period collapse and looked like we could have cared less about the game. When You get 8 minutes of power play time against the opponents 0 you should be able to make something happen. Instead they get a shorthanded goal. Wow. I don't even know what to say. The first half of the game was well played. After that the wheels came off and... I don't even know. At least I don't need to renew my tickets for a while because this will not get us to the playoffs.

This loss means more than missing a few points though. After Thursday you can count on the trade talk surrounding Olli Jokinen and Derek Morris to increase significantly. DMo has said that he wants to stay, but he's looking for a payday the Coyotes can't give him right now. Jokinen hasn't been the player many had hoped he'd be and management my look to deal him for some blueline depth.

Anyhow, i'm frustrated and tired of being strung along both in the season and in each game. We start with so much promise and then inevitably implode. Argh!

Shane Doan opened the scoring with his 250th Career goal. He flipped a wrister right over Mason's left shoulder.

David Perron got the Blues on the board with a bouncer that was just supposed to be a clear for the change. It took a goofy bounce and squeezed right by Bryzgalov and in. Absolutely ridiculous.

Jay McClement got the game winner on a 2 on 1 shorthanded goal at the beginning of a 4 minute double minor Power Play for the Coyotes.