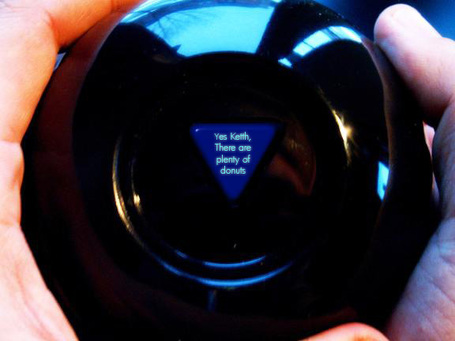 Magic 8-ball, now adaptable to answer your most common questions. Even if that question is "Are there any donuts left?"

FYI: We'll be heading over to St Louis Gametime for the 1st Period of tonight's game and then back here for the 2nd and 3rd periods.  Be sure to bring along any sharp objects you may need to defend yourselves as they're a salty crew over there.

Alright guys, time to hunker down and get us a few more points to get into the Playoff race. The Blues may not be the toughest opponents in the game, but that doesn't mean we can just walk in and take two from them, we're going to have to earn it!

Keep the puck moving towards the net:  6 goals in the last game against the Kings. That all happened because of traffic going to the net, deflections and most of all not getting too cute and just moving forward. Mason will be a tough nut to crack though so you have to keep it up tonight.

Olli Olli Oxen Three!: Olli Jokinen had been on a pretty cold streak there. A Hat Trick tends to cure a lot of those cold streak ills though. We'll see if he's able to keep it up tonight. I certainly hope so, o hot streak out of Agent 12 would be really nice right about now.

No Mixed Drinks Tonight: Those line you had in LA really clicked Wayne. Not put the blender away for tonight and just do straight lines. Otherwise you're going to have me wanting to do straight shots instead.

Keep up the shot blocking craziness: With Kurt Sauer being back and paired with Z, the biggest shot blocking tandem in the league is back up and running. Sauer isn't playing at 100% yet, but the pairings have gone back to normal and look 5 times better out there. Thank god. Our D was looking terrible.

Give Bryz a Chance!: 6 goals is more than enough, but don't let this trun into a goalie battle. Find the back of the net early so that Bryz can play loose and not like the entirety of our playoff chances lie on his shoulders (even if they kinda do).