David Shoalts Must Really Hate the Phoenix Coyotes - Part 3 of ?

Share All sharing options for: David Shoalts Must Really Hate the Phoenix Coyotes - Part 3 of ? 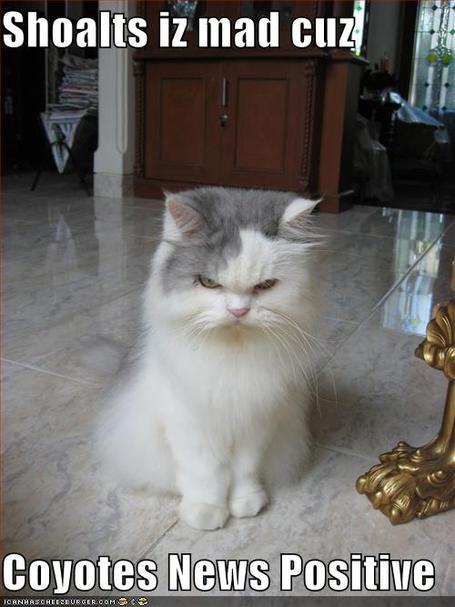 Well shortly after some good news finally comes out about the Coyotes financial situation, Five for Howling's favorite North of the Border Globe and Mail hockey writer with a last name that rhymes with... I dunno...Blowalts, writes yet another crappy article. This one sounds quite a lot like he's saying "Are you friggin kidding me? This is what I devote a third of my time writing about! What am I going to do now?" Those that have read my previous posts about Davey know that one of my biggest beefs with him is that he has rarely, if ever cited a named source about anything other than Paul Kelly saying Scottsdale is far from Glendale. (Good catch there Davey) Well our bestest buddy doesn't fail to disapoint this time either. Also, if you look at the article everything that could be construed as positive is put in "quotes" and makes the article read like everytime he gets to something good he's doing airquotes to make it seem like crap. For example "potential investors", enough about that though. How about we go to the highlights sports fans...

When sources familiar with the Coyotes' situation were asked about yesterday's reports, all said they had heard nothing about any serious interest in the team.

"Who would make an offer on that team?" one source said, referring to the total losses of the Coyotes, said to be as much as $250-million since Moyes took control of them in 2001.

Now, see how he doesn't really cite anything of consequence there? Here, let me make something up and see if it really reads with any more or less credibility:

When I shouted across the newsroom to Stephen Brunt, who is familiar with the Coyotes situation, "Hey Steve! Have you seen that report about the Coyotes getting new investors?" He replied, "Nope, I haven't heard anything about it. Who would make an offer on that team? Aren't they losing a bunch of money?"

Do either of those really sound better than the other? Not really. Bang up job of reporting there Davey.

Also, as I said before, there are a ton of "quoted" bits that sound like "airquotes" or Davey "being a prick", here's a look

...the surfacing of other "potential investors."

The report did not identify the potential buyer and said the offer would only lead to "dialogue and further negotiations."

The report also said there were two other "serious parties" interested in the team...

How can he quote that? You're asking? All he did was take the very brief press release from the team found here and the TSN report found here and chop them into bits to sound as negative as he wanted. I really don't get why that paper can't write a straight story about this instead of filling space with badly cited junk and misleading text. Maybe everything isn't roses, but Davey if you think the Coyotes or the league is full of crap about these investors, say that instead of airquoting and pulling quotes from nowhere. At least that I could have some respect for.