The More You Know... What the Coyotes Sale Means

Share All sharing options for: The More You Know... What the Coyotes Sale Means 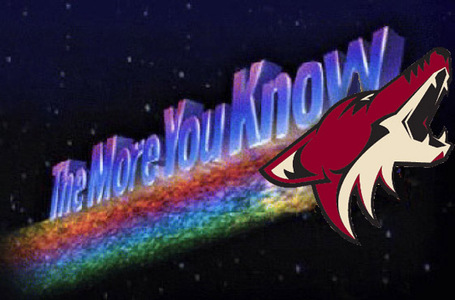 Some in the sports world and sports media (who I will address tomorrow) were shocked to hear about offers made to the Coyotes about selling the team to new investors. Today Jerry Moyes confirmed to the press that indeed the team had received initial offers from at least 3 different investment groups. The team has started looking into those offers and we won't be hearing from Moyes again until they figure out what to do apparently. There was also confirmation that the City of Glendale was budging on some of the lease agreement. Again no specific information was to be found as Glendale is notoriously tight lipped about everything. So what's the point of this article then? To explain exactly what I, and I'd say most other rational people think is going to happen with the finances of this team.

Finally! They'll sell to someone who can move the team!

That's the familiar refrain that you seem to find around the internet when Coyotes news comes out. Heck even when the news is completely unrelated, like Boedker making the Youngstars team, you get snide remarks about the team not being there next year et al. The type of deal that is being talked about should put an end to that, though I know i'm being optimistic at best by hoping so.

What is seems like is going to happen is that Investment group X we'll call them will buy up a good portion ot the Moyes controlled percentage of the team. I'm not sure exactly how much of it he owns at the moment, but in the past it's been said that he'll end up with 20% of the team and sell the remainder. The cash generated from that sale will not go into the pocket of Moyes, but rather to pay off the debts currently associated with the team that are not so slowly strangling it. This influx of cash will not necessarily magically make all losses disappear, but shrink them to a manageable level. Part of the reason that the team has such a high amount of losses is that they've basically used one loan to make payments on previous loans they took out to cover debts and generate some opperating capital as well as the overages on the arena construction. Sounds absolutely terrible. It's just like using one of your credit cards to pay the minimum on your other 4 cards. You're just screwing yourself up. And once you get to the world of corporate finance the interest charges and monthly payments aren't exactly 100 bucks a month. That alone could free up a ton of cash to be spent on the team instead.

Will such a move get us out of the revenue lacking hole we've been in? Probably not entirely. Even the NBA is having to take out money so that its teams are okay (Glove tap to PPP). What it does do it put the Coyotes on manageable ground. Once you get rid of interest accruing debt along with well, the interest, It makes paying down and covering other losses much easier. The Coyotes still have a lot of obstacles in their path. They've started the end of the season dive again. They've got a key free agent in Derek Morris that they need to get signed and they've got a whole lot of highly skilled young guys that are going to be coming out of their entry level deals soon. That makes getting this sale done soon extremely important. If we can't get something done by summer time, we're going to be stuck in the same place as this year. A talented team without the depth to take it to the end of the season. So here's to hoping this gets resolved in a hurry.