Share All sharing options for: Have a Seat Boy(s), We Need to Have a Little Chat... 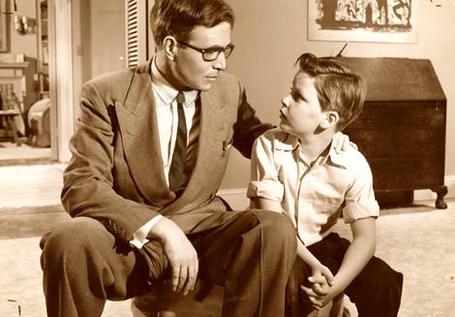 Have a seat son. Here, have a glass of milk. It makes your bones strong so you can take those checks like a champ! Anyhow boy, we need to have an important talk. Birds and Bees? No no no, that's what those magazines under pops' bed are for kiddo, ha ha ha. No, we need to talk about puting effort into everything you do. You know that C you got in Math class? Remember what happened? That's right your little kiester got grounded. That's how we learn our lessons in life, through punishment and discipline. Did I let you take some time off because you were tired of Math? Surely not. I made you memorize those times tables up to 100 didn't I? Yeah... You didn't come back with any Cs after that now did you? Well son, it's the same with your hockey. If you don't perform your best then bad things are going to happen. You won't win. You'll be a loser. Do you want to be a loser son? Of course you don't. Losers end up traded to Atlanta, or worse, the Islanders. Would you like to play for the Islanders...? I know you're not really an NHL player boy. It was a rhetorical question. Though if you ever play like that you'll be bag skating your hieny off. The fact of the matter is that you could get paid millions of dollars to play a game as your job. You should have pride in your job and do it well. You should always work hard and not take long periods of time just standing around doing nothing. That doesn't mean you have to come out on top every night. But usually when you work hard in practice it makes a difference on the ice. If you don't work hard you end up playing golf in April instead of playing hockey and everyone knows golf is pretty lame. You want to be in the Playoffs. Going for the ultimate prize in all of sports, The Stanley Cup. So what are we going to do to make that happen?

Here's what we need to do. Basically we have to scrounge up enough wins to battle our way back up. The problem is that we've played more games than almost everyone in the Western Conference. We need to get a whole lot of points out of the remaining schedule. The upside of that is that we're going to be playing a whole heck of a lot of 4 point games. The downside is that we have a ton of road games coming up and unlike last year we've sucked on the road. Let's take a look at what's left on the schedule...

Now. There are plenty of road games in there, but there are lost of games against teams that are not all that great, or we have played well against all year. The toughest games will be Boston and San Jose for obvious reasons, though San Jose hasn't been at their best lately and we've played really well against them to date. Let's say we're able to win one of the Detroit/Boston games and one of the San Jose. That gives us 4 loses to spread around. That's not a lot, but against competition that's not the absolute top. Lots and lots of 4 point games in there with the teams that are clumped around us. With how even everything has been the threshold to get into the playoffs in the West may be a little lower than 90. I'm not counting on it though. Basically we need to get our crap together approximately yesterday. If we don't get 4 of the next 5 against EDM, ATL, LA, STL and NSH then things will look ever bleaker. we need more than 2 wins for every one loss to get to 90 right now, so I guess it's time to cross all availiable appendages that will safely allow for it. Sacrifice some chicken to Jobu and hope for the best from here on out.