Share All sharing options for: Arizona Sundogs Week 7 & 8 in Review 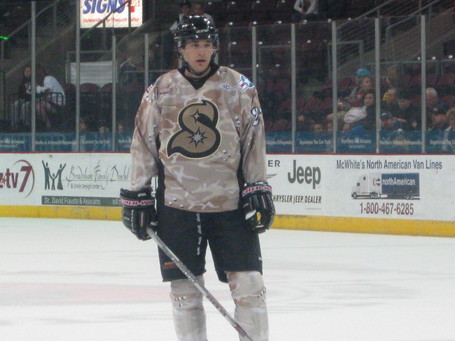 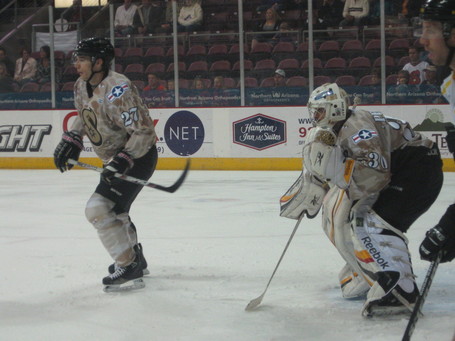 Jon Landry and JF Perras in the military tribute uniforms

The Sundogs opened back-to-back games against the Colorado Eagles on the Friday night after Thanksgiving. The first match-up was a low scoring affair. Neither team tallied a goal in the first period. It wasn't until 15:33 of the second period that Arizona's Linus Fagemo scored on the powerplay. Colorado's Ryan Tobler evened the score at 19:33 of the second with an even strength goal. Tobler scored again at 12:30 of the third period, putting Colorado ahead for good. Arizona outshot Colorado 29 to 28 on the night.

Game two had all the makings of a chippy battle, but unfortunately it failed to produce. Colorado started off the scoring with a goal by Alex Penner at 6:06 of the first. Arizona's Kevin Gardner evened it up with a powerplay goal less than a minute and a half later. Colorado then when on a scoring marathon. Brett Lutes tallied one at 10:48 and Ed McGrane at 17:57 of the first. All the scoring in the second belonged to Colorado. Steve Haddon got an even strength goal at 5:42, Riley Nelson a short-handed goal at 11:10, and Aaron Schneekloth an even strength goal at 18:28. Arizona goalie JF Perras was in net for the first two periods, but Kyle McNulty came out to begin the third period. Arizona tried to begin a comeback when captain Chris Bartolone scored on the powerplay, but that was all the Sundogs could manage. Colorado netted two more though, both even strength goals, the first by Riley Nelson at 2:58 and then by Ryan McLeod at 10:48.

Stinging from the back-to-back losses, Arizona then headed onto the road for the first three of six straight away games.

The Sundogs traveled all the way to Louisiana to open their season long road trip. On December 1st, Arizona matched up against the Bossier-Shreveport Mudbugs with hopes of putting the six goal loss behind them. Instead, the game would have a serious feeling of déjà vu. The Mudbugs showed amazing consistency, scoring two goals each period. Scott Kalinchuk even strength at 8:32 and Joe Blaznek  on the powerplay at 14:10 of the first; Tyler Liebel even strength at 2:06 and Shawn Limpright even strength at 11:03 of the second; Joe Blaznek on the powerplay at 12:35 and Travis Clayton on the powerplay at 14:03 of the third. The Sundogs were unable to tally a single goal and suffered their second straight six goal loss. Arizona goalie JF Perras showed his frustration by dropping his gloves and fighting with the Mudbugs forward Brett Smith at 17:35 of the third.

Two days later, the Sundogs found themselves in Corpus Christi to face the IceRays. The first period saw a bevy of scoring, unfortunately most of it by Corpus Christi. The IceRays Rob Jarvis scored at 3:39 on an even strength goal. Arizona's captain Chris Bartolone tied it up with a powerplay goal at 7:59. Corpus then scored two powerplay goals, Chad Woollard at 13:53 and Chris Richards at 15:39. Corpus racked up all the scoring in the rest of the game as well. Morgan MacLean scored at 4:26 of the second, and Jason Tessier got two goals in the third, one at 1:07 and the second at 12:31.

With four straight losses, Arizona was desperate for a win as it went to Rio Grande Valley on December 5th to face the Killer Bees. The powerplay continued to improve for Arizona as Linus Fagemo scored at 5:55 in the first. Captain Chris Bartolone scored another powerplay goal at 11:59 of the second, and Kyle Hood got an even strength goal at 12:18 of the second. Rio Grande's Daymen Rycroft scored a powerplay goal at 7:56 of the third, but that was all the Killer Bees could manage. Arizona got off the snide with a 3-1 win.

Arizona will go on the road for three more away games in the upcoming week.