Share All sharing options for: Arizona Sundogs Week 5 in Review 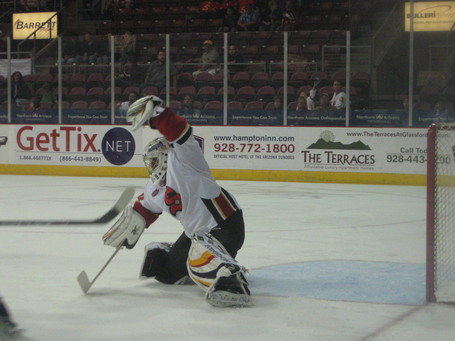 JF Perras flashes out the glove

On Friday the 13th, the Arizona Sundogs opened a two game home stand against the Corpus Christi Ice Rays. (Don't ask me, I have no idea what an Ice Ray is either.) Following the trend set the weekend before, Arizona got the scoring going early with a goal by Torren Delforte 3:43 into the first. The Sundogs scored again, taking advantage of a delayed penalty on Corpus, Jon Landry sailed one past Kevin Desfosses at 12:20. Having given up two goals on four shots at that point, Desfosses was pulled and back-up Kris Tebbs was put in for Corpus. Just 21 seconds later, Sundogs' Kyle Hood scored on the cold Tebbs. Linus Fagemo, in his first game back off of IR, stretched Arizona's lead to four as he drove one past Tebbs at 13:40. With two goals given up on two shots faced, Tebbs was pulled and Desfosses put back in the net. Arizona's Kevin Gardner took a high-sticking double minor at 17:53, and the opportunity proved too much as Corpus finally got on the board with a goal by Justin Quenneville. The first came to an end with Arizona up 4-1. In the second, Corpus came out from what had to be an unpleasant locker room looking like a different team. Jereme Tendler scored for Corpus at 8:47 and Chad Costello at 10:34 to cut the lead to only a goal. Arizona's ailing powerplay came to life with a goal by Konrad Reeder at 15:21, regaining the two-goal cushion for the Sundogs. The only scoring in the third was another powerplay goal by Arizona's Jason Visser just 1:33 into the period. The final buzzer sounded on a 6-3 Arizona victory.

Saturday's rematch was gauranteed to be ugly and didn't fail to deliver. Just 16 seconds into the first period, Jereme Tendler scored for Corpus, followed by Morgan MacLean shorthanded at 3:50 and Chad Woollard on the powerplay at 5:08. Arizona got on the board with a Kyle Hood powerplay goal at 8:34. The rest of the action in the first was penalties with Corpus racking up six and four for Arizona. The second period picked right up with the penalties, Sundogs' Marek Jancek and Konrad Reeder both taking penalties 52 seconds in. With the 5 on 3 advantage, Chris Richards scored for Corpus. Torren Delforte scored for the Sundogs at 4:42, but Corpus got the goal right back with a tally by Ryan Garbutt at 5:50. The second period saw five penalties for Arizona and four for Corpus. Scott Thauwald netted one for Arizona at 13:49 of the third. The final goal of the game was a penalty goal awarded to Corpus' Ryan Garbutt at 19:34 as he broke out at an empty net and was then interfered with by Arizona's Chris Bartolone. Corpus racked up ten penalties in the third as did Arizona. Corpus ended the night with 23 penalties for a total of 60 minutes and Arizona had 19 penalties for a total of 52 minutes. The final score was Corpus 6, Arizona 4.

In all my life as a sports fan, I have never seen a worse reffing display than the game Saturday night. Even though the officiating crew was the same one as Friday night, you would have thought they had never reffed a game. The game ran 3:15 in length with at least 35 minutes of it spent in the third period with the refs standing around trying to figure out what to do. At one point late in the third period, the refs sent a Corpus player to the locker room, only to send the Corpus coach to go get the player back after more discussion. I realize this is minor league, but it is still professional level and the reffing that night was a disgrace.

Arizona's special teams still continue to be a weakness for the team, as does their inability to maintain their intensity for 60 minutes every night. The team goes on the road next for three games in three nights in three different cities.