Share All sharing options for: Arizona Sundogs Week 4 in Review 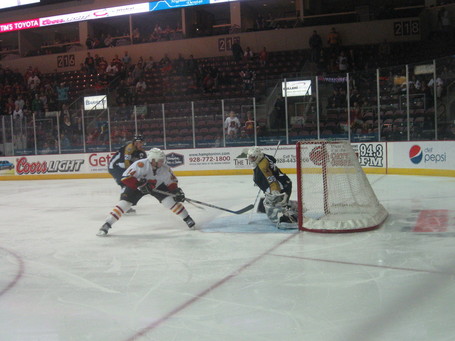 Week 4 started with the type of game Sundogs fans have been waiting all season, and a lot of last season, for. Facing the Laredo Bucks Wednesday night in the first of three straight, Arizona's struggling powerplay got the romp started at 7:25 of the first. Torren Delforte's hot hand continued to pay off when he redirected a pass into the net. Arizona's Scott Thauwald added another goal just two minutes later and the Sundogs got out of the period up 2-0. The second period picked right up where the first had left off with Kevin Gardner tallying number three for Arizona at 3:04. Evan Shaw added number four at 10:07 and just 23 seconds later Torren Delforte got his second of the night. Rookie Joey Sides notched a goal 14:33 and Torren Delforte got his second of the just as the period was coming to a close. Arizona notched five even strength goals in the second period while goalie JF Perras continued to turn away every shot he faced. Kevin Gardner got his second of the night at 4:21 of the third. With Arizona's Steve Potvin in the box on a slashing call, Scott Thauwald broke down the ice and capped off his hat trick with a shorthanded goal at 6:40. JF Perras earned the team's first shutout of the year as he turned away all 28 Laredo shots. The 9-0 win was the largest margin of victory in franchise history. Thirteen different players figured in the scoring for Arizona with ten of them having multiple points. The game is up for Performance of the Week on chl.com and voting is open until 11/16.

Laredo and Arizona met up for game two on Friday night. Still smarting from the loss two night previous, Laredo came out with intensity and scored just 2:51 into the first on a powerplay goal by Maxime Lincourt. Laredo's Evan Schawbe racked up a second powerplay goal at 11:37 of the first with Arizona's Mike Nesdil in the box for boarding. Rookie Joey Sides got the Sundogs on the board with an even-strength goal at 12:30 and the period came to an end with Laredo leading 2-1. Despite ten penalties being called in the second period, six on the Buck and four on the Sundogs, both teams went scoreless. Konrad Reeder tied the game just 53 seconds into third period, tallying the only goal of the period and sending the game into overtime. Despite a cross-checking penalty on Arizona's Kyle Hood, the overtime went scoreless and the Sundogs found themselves in their first shootout of the season. In the shootout, Laredo's Jeff Bess scored while the Buck's goalie turned away all five Sundogs shooters, giving Laredo the 3-2 win.

On Saturday night, Arizona continued the series trend of early scoring as Jason Visser got the Sundogs on the board just 3:41 into the first. The Bucks' Adam Rivet tied the game up on a powerplay goal midway through the period, wrapping up the scoring for the period. Laredo's powerplay would strike again at 10:34 of the second as Mike Looby scored. Just nine seconds later, Neil Trimm would score and put the Bucks up by two. At 2:59 of the third, Arizona's Jon Landry cut the deficit to one, but Laredo regained the cushion on Maxime Lincourt's goal at 7:41. Marek Jancek drew Arizona back to within one at 10:44 of the third, but the comeback would fall short.

Arizona ended the week garnering three out of six points, but that still places them as the last team in their conference with an overall record of 3-5-2. Except for one two goal loss, all the Sundogs' losses have been by a single goal. Special teams are a weak spot for the Sundogs this year with their powerplay second worst in the league and the penalty killing third worst. The team is showing flashes of brilliance, as displayed during the 9-0 romp, but they are having trouble putting 60 good minutes together every night.

Arizona goaltender JF Perras earned the CHL Performance of the Week honors for his 47 save performance on October 30 in the Sundogs 4-2 win of the Rio Grande Valley Killer Bees.