Share All sharing options for: Arizona Sundogs Week 2 in Review 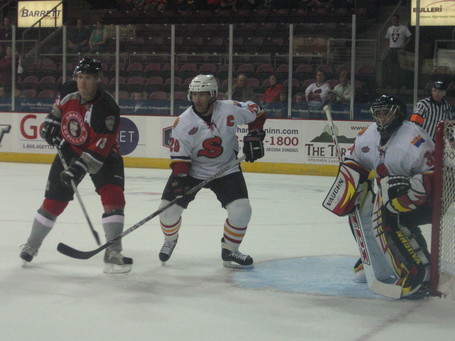 Week 2 started with a familiar sight, another loss. In their third straight home game to open the season, the Sundogs suffered their third straight loss, this time to the Amarillo Gorillas; one of the league's top teams this year. Although the Sundogs out-shot the Gorillas 18-6 the first period ended in a 1-1 tie on goals by Amarillo's Jason Hill and Arizona's Marek Jancek. The second period brought even more frustration as it ended with the Gorillas up 3-1 on goals by Stuart McRae and David Nimmo even though Arizona had the advantage in shots 31-14. When the final buzzer sounded, the Gorillas won 5-2 though the Sundogs had a 46-22 lead in shots. Amarillo added goals by Jake Morisette and Anthony Battaglia and Arizona's Torren Delforte got his first goal as a Sundog.

The Sundogs hit the road for games four and five, hoping the change of scenery would bring a change of fate.

Traveling to South Dakota for back-to-back games, the Sundogs met up with the Rapid City Rush. Game one on Friday night began with an all too familiar air this season as the first period ended with the Rush up 1-0 on a goal by Jon Pelle in the first minute. The Rush tallied another one in the first minute of the second period on a shot by Les Reaney. But then, the tide began to turn as Arizona broke through the Rush's defenses. Torren Delforte notched his second goal of the year before Steven Potvin scored again just 28 seconds later, tying the game. Jason Visser netted number three for the Sundogs 30 seconds later, setting a club record for the fastest three goals, giving Arizona its first lead of the season and chasing the Rush's starting goalie from the net. A minute and a half later, Visser tacked on another one and the period came to an end with the Sundogs up 4-2. Rapid City fought back in the third period to tie the game up with goals by Les Reaney and Brendan Cook. Recently resigned veteran defenseman Jon Landry gave Arizona the lead again with less than five minutes to play and the Sundogs held on for their first win of the season.

With hopes of a repeat performance, Arizona faced Rapid City again on Saturday night. The opening period went scoreless, despite seeing a penalty shot awarded to the Rush's Colt King. Sundog goaltender Kyle McNulty turned aside the shot by King effortlessly and the period ended with Arizona leading in shots 13-7. Kevin Gardner scored on the power-play for Arizona in the second period and Konrad Reeder added a second goal for the only scoring in the first forty minutes. Rapid City cut Arizona's lead in half early in the third period on a goal by Les Reaney, but the Sundogs regained their two goal lead on Jason Visser's goal halfway through the period. The Rush refused to give in though and cut the lead to one again on a Rich Hansen goal with less than three minutes to play in the game. Arizona's Kyle Hood took a roughing penalty at 19:16 and with their goalie pulled for the 6-4 advantage, Rush's Scott Wray netted the tying goal. Wray scored again 1:15 into overtime, giving Rapid City the comeback win even though they trailed Arizona 23-43 in shots.

Getting three out of four points on the weekend's games was good, but Arizona should have had all four. They seemed to relax with their first late game lead and it came back to bite them. The team seems to be gelling though and there are signs that fans should not give up hope. The team has a lot of players this year who are accustomed to European style and ice size, so it was foreseeable there would be adjustments that needed to be made. The increased number of shots is a really good sign, the chances are there the tem just needs to take advantage of them. The penalties are going to continue to be their downfall though if the team cannot learn to control itself when it matters the most.