Share All sharing options for: Arizona Sundogs Week 1 in Review

Editor's Note: Valerie is covering the Sundogs for us on Five for Howling. While they aren't our affiliate anymore, it's still good to know what's going on in Arizona hockey. She'll be updating us weekly on the goings on up in Prescott Valley. 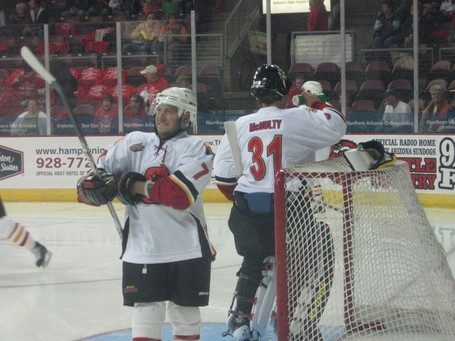 Saturday night brought game 2 and while the final outcome was still a win for the American's, how they got there was completely different. The American's started Charlie Effinger for the second straight night and the Sundogs' went with J.F. Perras. Four minutes into the first period, Allen had a two goal lead on scores by Chris Kaufman and Christian Gaudet. Arizona pulled even before the end of the period with a power play goal by Kyle Hood, assited by Mike Nesdill and Thomas Roussel, and an even strength goal by captain Chris Bartolone, assited by Kevin Gardner and Jason Visser. The second period ended with Allen up 5-2 on goals by Jarret Lukin, Erik Adams, and Jordie Benn. The American's scored first in the third period with a goal by Tobias Whelan. Arizona attempted a comback with a powerplay goal by Torren Delforte, assisted by Chris Bartolone and Mike Nesdill, and a short-handed goal by Konrad Reeder but ultimately fell short. Allen racked up 44 total shots and 38 minutes of penalties, Arizona totaled 24 shots and 32 minutes of penalties.

My impressions so far are that the Sundogs just came up against a better team. Allen's defense was nothing short of impresive. They repeatedly got sticks in the lane to break up passes and tied up the Sundogs' sticks the rest of the time to prevent shots. Arizona seemed to get frustrated and began to dump and chase, a tactic that just doesn't work for them. I think the true test for them will come Wednesday when they play a team they are familiar with; that will show where they really need to work.

The next games for the Sundogs are Wednesday at home against the Amarillo Gorillas, and then Friday and Saturday at the Rapid City Rush.