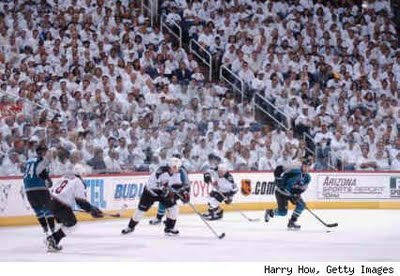 Tonight is the night. Home opener. Fans clad in all white. This is going to be awesome. The game officially sold out on Thursday, but some standing room only seats were on sale yesterday. Haven't heard if those too have now been sold out, but whatever. For all intensive purposes this game is sold out. Sure, it's at reduced prices, but so what? The Coyotes needed to get the building filled up. Get some new people interested. Get fans that had been pulled away by a bad on ice product with a new system that had us beating down the Penguins on Wednesday.I'm all kinds of excited for this game even if it is against the Blue Jackets who we have no rivalry with. That just means we won't be seeing may Jackets sweaters in the crowd and will be more partisan than usual.

On the hockey side of things the Coyotes have looked good to great in the first three games of the year, even in the loss. Game one we lit up the Kings, though our PK was weak. Game 2 had us trouncing the Pens. Then while we lost against Buffalo we didn't look terrible doing it, the Sabres just had more energy after a 5 day layoff than we did on game 2 of a back-to-back. Our chasing around Kaleta for his hit on Prucha all game didn't really help either.

The Blue Jackets have gone 2-1 so far this season with the loss coming on Thursday night against the Sharks. Dany Heatley put up a hat-trick on Steve Mason and downed the Jackets 6-3. Jared Boll and Mike Commodore are both still listed as day-to-day.

***For those fans attending the game, there is a pregame tailgate put together by the Save the Coyotes Coalition. It will be in lot J and the password to get by the security/parking folks is "Save the Coyotes" if you're asked for one. It kicks off at 1pm and ends about 4 since that's when the gates open.***

Feed off the Energy: Jobbing.com Arena should hopefully be rockin' like never before. While the building has yet to hold a real playoff whiteout, this should hopefully be close. The team needs to put a show on for all those fans that stuck with the team, as well as those that just came for the cheap tickets. Make them believers.

Day of Rest: Hopefully the team was better able to recharge after a day off yesterday. The Buffalo game wasn't bad, but I like the team way more when they don't get winded. If we can replicate the same effort as we had Wednesday tonight, we'll be coming away with the win.

Goaltender is king: Both Starting netminder Ilya Bryzgalov and backup Jason LaBarbera have looked solid in every game so far. If they keep up the same types of performances, win or lose, we'll be in the majority of games this year. Bryz gets the start tonight after LaBarbera got the nod against Buffalo.

Dominance in Home Openers: The Coyotes haven't lost a home opener since 2002. So yeah. Eat that.

Coyotes not allowing goals: In 3 games so far the guys have only allowed 5 goals against. While that may only be for 3 games, it's enough to tie them for 3rd least goals against, and tied for first with teams that have played at least 3 games. (BUF and NSH have only played 2g each). That's pretty good compared to how we were coughing up goals last season. Let's see if the trend continues.