Sabres down Coyotes 2-0 - Dogs forget that they have to play 3 periods...

Share All sharing options for: Sabres down Coyotes 2-0 - Dogs forget that they have to play 3 periods... 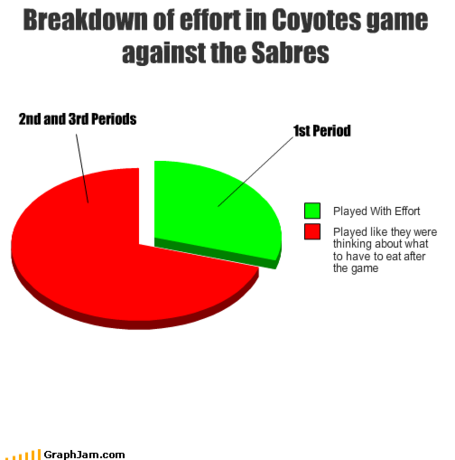 Well good to see that we can play 1 solid period of hockey, but by this point of the year we sould remember that we're supposed to play 3. Or at least 2 and a half. To the Recap!

Power Play: Plently of chances, lots of them wasted. Well, I suppose all of them were wasted, but some of them more than others. And it wasn't like we would go long stretches of bad power play, one would be good, the next bad, then it would look good again, etc. We just couldn't make anything happen. 0 for 7 though... that's just terrible.

Keep up the pressure: The 1st period was amazing in terms of the hitting, and the all out scrappyness of the team. They apperently took a nap after intermission though because they didn't look anything like the same team after that.

Give Bryz some help: Not really. Bryz played well, 2 goals That really weren't his fault, though he didn't get across fast enough for the 2nd. The first was loose in front and looked like he had it, but there was never a whistle and Buffalo forced it in. 2nd was a good pass across the goal that he just couldn't get there for and wasn't covered by anyone on D.

Weather the injuries: The fill-ins and the young guys played pretty well Goertzen had a good scrap, Perrault played well and Lindstrom and Lisin are looking goo out there still.

Find the net: Two straight shutouts... 142 minutes and 36 seconds without a goal. This is exactly the kind of streak we can't afford right now. Part of the problem tonight was that after the first everyone was trying these crap touch passes that weren't getting to their intended destination. I'd rather a hard pass that goes down the ice instead of a feathery little thing that just gets turned over right outside the zone. Picking up the passing should be #1. The chances will come if you can connect.

We don't play again until Tuesday, then we have Nashville and turn right around on Wednesday against Detroit. We need to get these two games. These losses have started us slipping back in the standings and we can't afford that right now.