You're Dead to Me - FfH Has Had Enough of This

Share All sharing options for: You're Dead to Me - FfH Has Had Enough of This 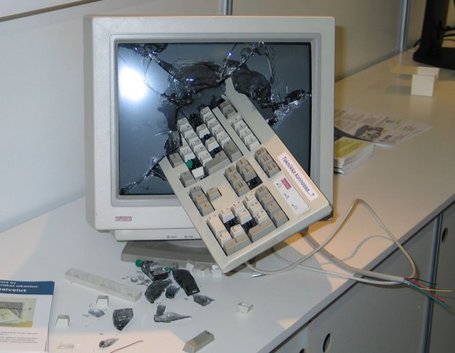 The scene at the Globe and Mail sports department offices after OdinMercer eliminated all intelligent life other than James Mirtle. Unfortunately that also means everyone there except this computer survived.

Note: Five for Howling Prides itself on being a respectful hockey loving place to discuss the Phoenix Coyotes and hockey in general. If one word could describe us, it would be classy. That being said, the writers of this blog (me) may have to momentarily break with our fine classy tradition as many of these topics need to be addressed, but we may not have the ability to be completely rational or "nice" about it. There may even be a swear word or thirty. Also note that I am trying my best to be nice about things, so give me some points for effort. Those with weak constitutions should probably visit websites such as this. Or Moose, you could simply Man Up and meet me after the jump...

By this point in our hockey season, you've probably read a zillion stories about anything and everything about hockey. You may have read things from around SBNation, some other blogs that while respectable, are not quite as cool as our little network (I kid, I kid) or even, dare I say, some type of main stream media that "covers hockey". The vast majority of hockey articles are benign. They inform readers about facts. Things such as scores, statistics, or fictional stories of Wendel Clark being like the Candyman. But sometimes some sorry excuses for sports reporters decide to latch onto a story and beat it into the fucking ground. Usually it's just something that lasts for a week or two and then it's mercifully over. However some of our hockey brethren, mostly to the north, have decided to take it upon themselves to take any and all troubles with our franchise in the desert and squealing about it with such glee that its physically nauseating. I'll do my best to breakdown exactly what my problems with this entire episode are in a somewhat coherent manner. I also know that not all Canadians fell the way I interpret some of this as. I'm not mad at Canada, just specific Canadian Media.

First let me say this: The Coyotes have severe financial problems. I get it. You get it. Everyone gets it. They've even acknowledged that fact. They haven't given out specific numbers, but we know it's a lot. I'm also not buying all the roses and sunshine that the NHL and the Coyotes are selling. I'm not a moron. I know that they'll say everything's peachy until the last possible moment. However, i'm just as unlikey to buy something that some hack journalist that has a hard-on for the Coyotes failure. And i'm not saying that because of one article. David Shoalts has been writing "Coyotes in Trouble" articles since 2002. Am I going to pay an outrageous $4.95 each for stories in the archives that came up when I searched the Globe and Mail for Shoalts stories about "Coyotes Finance Trouble". Um... no. I'm a poor hockey blogger. So i'll just ramble on about what I can get for free. 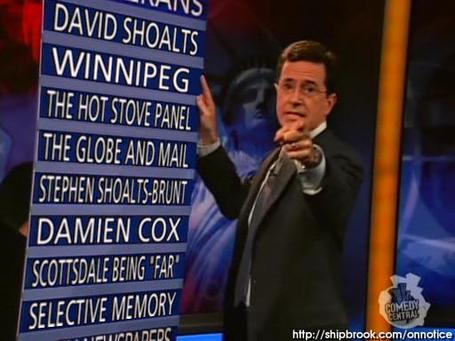 You're dead to me David Shoalts - My beef with you is not that you write negatively about the Coyotes. I can handle that. It's that you, or your paper, feel that every third day or so feel the need to practically regurgitate the same information over and over, with no real new information, but insisting that the team is in trouble. It is, its losing money, again, we get it. But when your grand solutions are contracting or moving the team to... wait for it... Canada. You quickly lose ground. Do things need to change for the Coyotes? Yes. Does that mean they have to relocate? No. Ottawa, Buffalo, Los Angeles, Nashville, et al. have had major financial problems recently. Any of those franchises moved? Nope. You had one solid article about the actual finances. Detailing how the actual finances are. That's useful, thank you for that. Does that make up for basically using nameless sources and using your past articles as evidence to support your current one? No. Maybe that's just how the game is played nowadays. If so, that's still no excuse. This one's for you.

You're Dead to me Stephen Shoalts-Brunt -  Right now you're asking yourself "Isn't his name Stephen Brunt?" Yes, but with how he writes a column right after Shoalts writes a story basically parroting the exact same points, he may as well be named Shoalts-Brunt. All that stuff from above. Ditto to you bub.

You're Dead to me Hot Stove Panel - The other night on Hockey Night in Canada, the panel took it upon itself to contract us. Um. You guys are morons. Seriously? Way to workout what of our players would be dispersed where. I expect this kind of amateur crap from Eklund. That's how much I think of that conversation. Terrible. I expect more of people that know something about hockey.

You're Dead to Me Winnipeg - We get it. You got hosed but good. The guys that shipped your team out of town are terrible people. I'm sorry they did that. You deserve a hockey team if you can actually sustain one. There are lots of questions about that with how much of a hit the Loonie has taken lately. I hope you get a hockey team someday. It's not going to be my hockey team though. In the meantime, please quiet down the morons in your town that like to say things like "Now you know what it feels like." Ahem... Fuck off. I did not take your team. Some millionaires did and moved it here. I have respect for Winnipeg, I like Canada, but stop salivating over our team like it's a Christmas ham. That is all. Oh, and we're not playing any more "home" preseason games there anymore. At least we had better not be.

You're Dead to Me People that Whine About Scottsdale Being Too Far Away - Not only do fair-weather fans around town use that as an excuse, but Shoalts actually used Paul Kelly, NHLPA executive Director, who visited for a few days as a source of someone who would know about the arduous trek from Scottsdale to Glendale. (Scottsdale being the money center or town) How long does it really take? About 45 Minutes. Here's a map. And really, Most of the money is in North Scottsdale. Even less time. Not a good excuse. Takes just as long to get downtown. Cry me a river. Glendale has build up around the arena and is awesome. Most people in other hockey markets would kill for that commute to the game. Mesa and Chandler? I feel more sorry for you. You can cry, but only for a minute because we're not moving the arena again. Sorry.

ARGH!!!! Okay. I think I'm done. Thank you for bearing with me through all this. Now that i've at least gotten all of that out of my system, hopefully I can deal with future slamming articles with a little more reason rather than anger. It's hard to see reason when you're blinded by rage.