Stars Fall to Coyotes in Shootout 1-0

Share All sharing options for: Stars Fall to Coyotes in Shootout 1-0 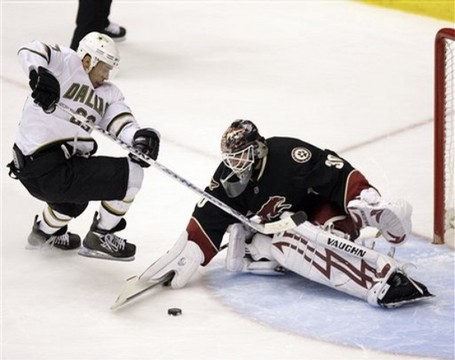 0-0 tie settled in the shootout... Not the most offensively exciting game in the world to say the least, but a great goalie duel and if I could have found a decent western shootout picture you would have had an awesome photoshop. Even though we came out on the winning end, I still hate that this goalie fight had to end this way. Is it dramatic, yes, but it still just wasn't quite satisfying. Don't get me wrong, i'm not giving that extra point back, but in the future we may just want to go back to ties.

Kyle Turris came through in the clutch at the end scoring the big goal to end it. And the team went crazy for him, making Bryz skate to the other end of the ice to get his props for the shutout. 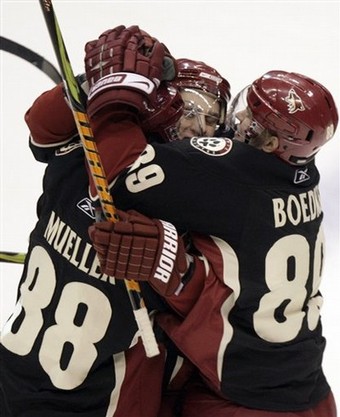 Disrupt the Passing Game: Not sure that we were that big on the takeaways, but we got a few breaks on Turco, though he was on top of his game tonight.

Take Advantage of the Mobile Quarterback Goalie: No, but again, nothing was getting by Turco until the shootout. He had a couple of close calls, but there was always a Dallas skate or stick blade to just catch the puck enough to make things go wide.

Make Big Tackles Hits: The guys were big on the hits last night. Doan especially was throwing himself around. THey still need to pick up the forecheck, but they're improving on the hitting front.

Contain the Defensive Line: Eh, they did okay. Still something to work on. The power play was able to keep it in at least for a short time, but they need to get stronger if they want to go anywhere in the second half.