Share All sharing options for: Stalking the Prey - Blues Clues!

In Preparation for tonight's game I had Blue from Blues Clues stop by to help me out with the keys to the game for tonight. Some jerk may have named him Blue, but he's got some Coyotes relatives, so he's a big fan.

Alright Blue, let's get this thing going. Can we cut out all the visits to your friends and just skip straight to where you left all the clues? I don't have time for the rest of that junk. I'm pretty sure Steve's on drugs too. He gives me the jibblies. Ready to go? Sweet. Take me to the first clue dawg! 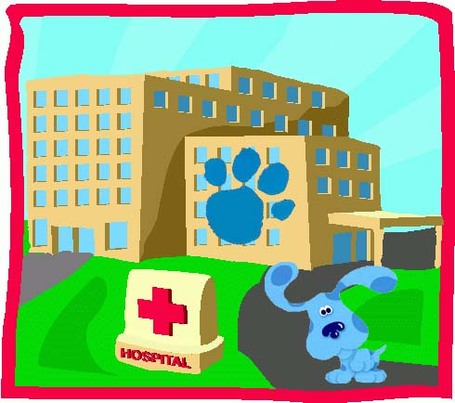 Hey Blue, why are we at the hospital? What someone got hurt? Lots of people got Hurt? Oh no! That's no good. Wait. The blues are hurt? All of them? Oh, just some of them. Okay...

Yeah, the Coyotes are out Olli Jokinen, but the Blues are one beat up team. They have 5 guys that are not just a little banged up, but out for quite a while. With Paul Kariya, and Erik Johnson among those out, that's a fairly big deal. The call-ups and role players have stepped up admirably, but that can only last for so long. Hence the Blues new found home in the basement of the West. They also traded away Stempniak who was a pretty scary player even with a lot of players out. That doesn't mean we should count on the W as St. Louis has upended their share of teams, but it'll at least make it a little easier. Find the injury rundown below... Alright Blue what's next? 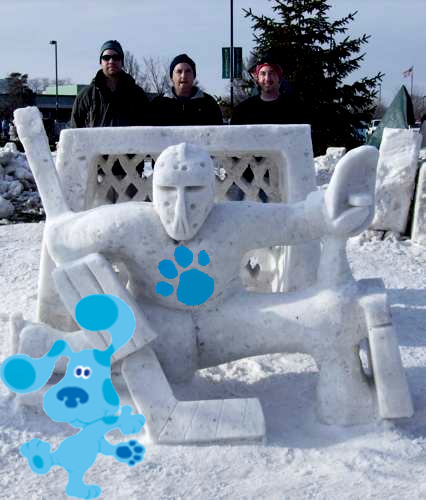 Sweet snow goalie Blue! Did you make that all on your own? No... Oh. Did you help? No? What the heck did you do? You paid those three goons in the background to build it for you with all that Nickelodeon money you have. That works. Well played. So I'm assuming that you're talking about...

KEY #2 - GOALIES
Yeah, our team had a little mini-goalie controversy, but Bryz is still the number one guy and gets the go ahead tonight. The Blues have been having their own goalie conflict as when Legace went down thanks to a Palin red carpet injury, backup Chris Mason has played pretty well in relief. Both have been getting their share of starts and especially with a 7 games in 11 days stretch, both of them will see action. Legace looks to be starting our game tonight though. Here's a look at the stats. Okay one more right? Alright. Let's get it moving. I've got food to get before gametime... 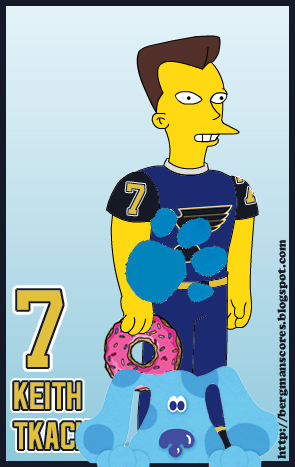 Why are you trying to take Keith Tkachuk's donuts Blue? You know how mad he gets when people take his donuts. What do you mean you weren't trying to take it? Your paw prints are all over it! Oh. The clue isn't the donuts? It's Keith himself you say? Got it!

Congratulations to the guy for accomplishing quite a feat. It's really quite impressive. He's only the 72nd person to get 1000 or more. The dangerous part of this for us, or maybe for the Blues is the fact that a feat like this comes with something very important. A pre-game ceremony. While they won't be doing the long drawn-out number retirement type of thing, It still makes for an emotional game. These things have a habit of turning out badly for the home teams. While I don't have exact numbers, it seems like any time teams have things like this they are all charged up for the hoopla and then fall flat in the game. Let's hope so.