Just some quick gameday info for the masses as I've got a ton of stuff to do today, and then the holidays are over! Yes! Finally!

Bryzgalov is out today as he didn't practice yesterday due to a sore back. Josh Tjordman was called up from San Antonio as an emergency replacement to back up Tellqvist.

Budaj will hopefully get the start in goal against us as we could use the boost and he's played pretty bad of late.

As for keys, hopefully the guys watched tape of the last game against the Kings. and then they watched it again. Then they cried. Followed by another viewing of the game and then they all pinky swore that they would never play like that again. Basically if they take that game and do the exact opposite of what they did there they should win 11-0. They were just bad. If you're not out and about tonight feel free to comment here. I'll be doin New Years suite style. Then having everyone over so I won't be around. Light up the comments with noisemakers and confetti and try not to pass out on the keyboard. 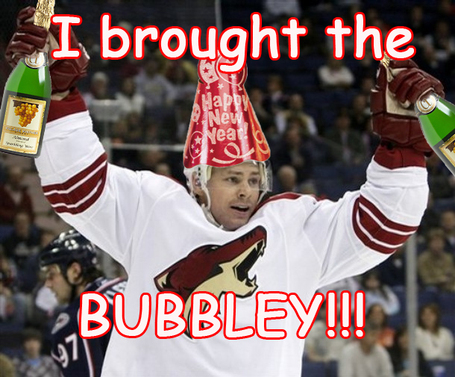