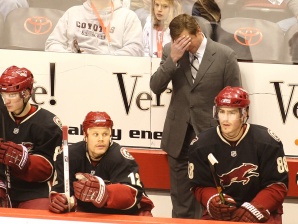 Yeah Wayne, that about sums up how I felt about the game. Though I'm fairly certain my feelings had more foul language, throwing of vases and over all anger and depression issues... Okay, just the cussing. But still could the team have looked anymore like they didn't want to play last night? Martin Hanzal was the only one throwing around the hits. Lisin And Boedker kept trying to breakout, but when the opposing team knows that no one else seems to be skating they can pretty much circle 4 guys around and stop that stuff. This game just made me sad. I'm not even putting the goals against Bryz either. The first one maybe, but it was a screened slapper with some speed and it's forgivable, and the others were just short of playing pinball with a hockey puck. That doesn't happen if the guys actually get the puck out of the zone. Instead they decided dainty passes would be better, and also forgetting the stick needs to touch the puck in order for passes to work. I'd point to some sort of bright spot from last night, but I don't really have any. I even waited til today to cool off from it and I still got nothing. They had better have had a long talk after that game...

THINGS TO DO BETTER: (Other than everything)

Power Play:  0 for 9... 0 for 9?!? Yeah. With 2 5 on 3s. Not only did they not score, they couldn't even get anything going. How hard is it to get into the friggin zone with 2 extra guys? Should be cake right? You guys made it look nigh impossible last night. 5 on 3 you have to at least get some good shots toward the net. Couldn't even do that. Someone has to act like they want the puck and want to score instead of constant "You take it, no you take it, no really you take it" for 2 friggin minutes at a time. Absolutely attrocious.

SKATE!: We're in the NHL boys. Move your feet to get to the puck. Don't wait for the puck, don't stand around waiting for the other guy to get the puck. I get that you might be tired, but goodness, at least keep moving. I can handle losing a battle for the puck, but to not even try? That's just not going to cut it.

Want the Puck: Much like the earlier two, if the other guy has the puck, you've gotta want that back. Be hungry. Play like that puck is yours and anyone that has it is going to pay for touching it. Take it back and protect it. Last night was just sloppy sloppy sloppy.

Clear the Zone Effectively: At least 2 of those goals last night were due to the fact that we had several chances where we had the puck on the stick but couldn't effectively clear. This should be simple guys, you've been doing it for years. Get the puck out of the zone, especially with how all over the place the whole game was, you can't let it stay inside the line. Lift it up high enough so that they can't glove it down while we're trying to change too.

Hopefully this performance earned you a bag skate this morning, and you all had a nice long thought about if you want to be a playoff team or not. Last night's team didn't look like they even want to play hockey. I'm not giving up on you guys, but please never repeat that kind of effort again...