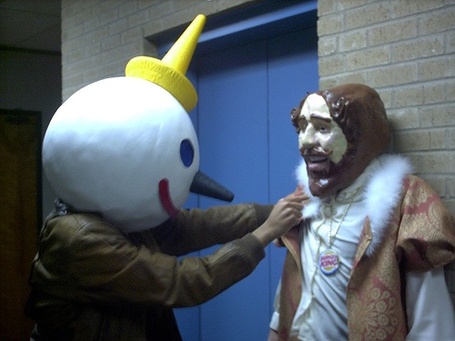 Great overall game by the good guys. We move into a points tie with Anaheim, though the Quackers have more Ws so they keep their spot in the standings... for now... The Coyotes started off the game playing physically and throwing hits around. One of the other things they did extremely well tonight was winning faceoffs. The Coyotes are 30th in the league in FO% at 43.3% while the Kings are 4th. While we didn't come out on top in terms of those numbers, it was still 23-25 which is a heck of a lot better than we've been doing in the circles.

Bryz made some amazing saves that kept us in the game, especially towards the end of the game. He made a couple of good ones when they Kings had the extra attacker out there with some nice pad and stickwork. Peter Mueller fianlly broke his 21 game goal drought getting that monkey off of his back so that he can hopefully get back to the form he was in last year. Shane Doan made an absolutely perfect pass onto the tape where Muels just had to tap it home. Doan was able to get the Coyotes second goal on a 2nd Period Power Play. Olli Jokinen took a slapshot after Turris got the face off win and Doan redirected it past Quick. The Los Angeles goal was scored after a missed call put the Kings on the Power Play in the 3rd Period. Olli Jokinen got called for the hold for pinning Dustin Brown to the ice after Brown punched him in the face. We got hosed a little there that there weren't 2 calls, but we ended up with the W, so not gonna complain about that too much.

Let's take a look at the highlights, be sure to check out Bryz's saves at the end...