Share All sharing options for: Coyotes vs. Kings OpenÂ Thread

Tonight, the Phoenix Coyotes face their hated division rival L.A. Kings in their first meeting in the regular season. With both of these teams fighting to stay at .500 and be a contender to make the playoffs in the west, they both need to come out hungry to earn two points. I'm looking for a physical game out of both teams, as while this may be the first regular season meeting between the two teams, they did mix it up a bit in the preseason. Look for the Coyotes to have already taken down Wayne Simmonds name in their book as during rookie exhibitions and preseason games he was a little too loose with the Coyotes rookies. Though Doan may have already taken care of that score... 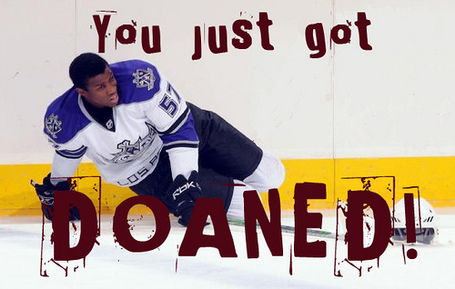 will start Mikael Tellqvist in goal tonight. Tellqvist has been impressive in relief of regular goaltender Ilya Bryzgalov, who has been slumping as of late. We'll also be without Olli Jokinen who continues to be out do to a shoulder injury suffered in .

LA will be attempting to come off of a letdown loss against the Toronto Maple Leafs last night. LA lead off with an early goal in the first minute of the game. They would hold that 1 goal lead until the third period when the Leafs scored two power-play goals and an empty netter for the comeback win. We should see pretty quickly if they'll be fired up to replace that memory, or still to tired and bummed to get fired up tonight. Jack Johnson and Marc-Andre Cliche are both out of the Kings lineup with injuries.